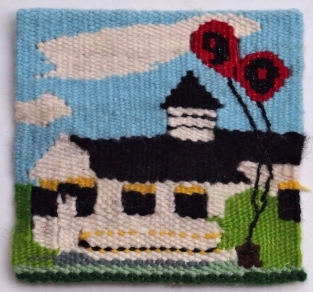 (Click on margins within the composite image below for a carousel of enlarged images. Click on an image for enlargement on black background.) 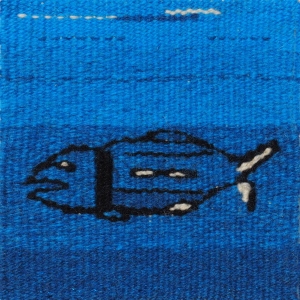 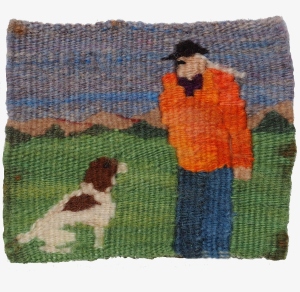 Janet Christensen: On the Ready 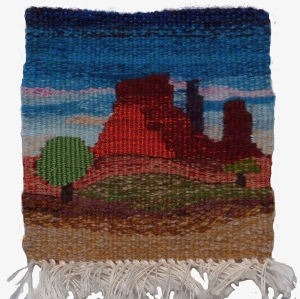 Sharon Schafer: Friend of the Desert 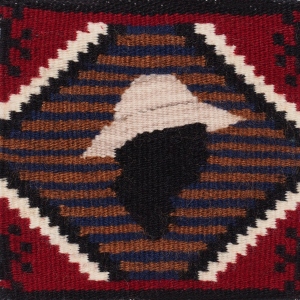 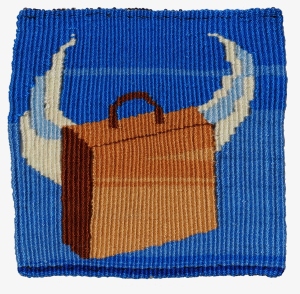 Audrey Moore: You Are What You Wear 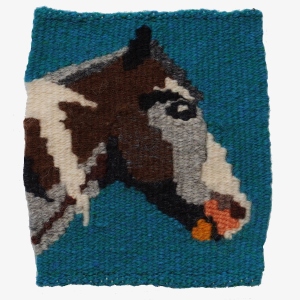 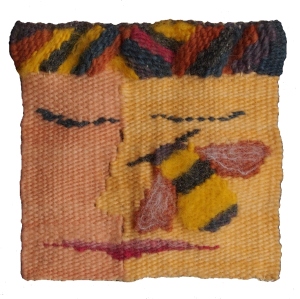 “Symbols, Place and Animals” looks at selfies that employ certain kinds of metaphors, using one thing to represent another—in this case the artist’s self. Personal “symbols” appeal to artists who address identity in their subject matter. Visual attributes of linear simplicity and reduction found in universal symbols typify these invented images. Whether or not they technically qualify as symbols, the process of distilling images that speak of the essence of identity is compelling.

Place is a an enduring kind of metaphor for the self. An artist’s selection of objects, perspectives and details of description presents the self as it is absorbed by, and reflected in, an environment. The specific carries the power of universal experience when careful observation informs imagination.  This allows us to believe a place is real and gives us access to the artist’s experience of place.

Across geography and time, humans have adopted animal images to encapsulate our identities. Think of totem animals, which name and represent clans, animal “milk names” given to babies before they are ritually welcomed into human communities, and the mascots of sports teams. Human identification with animals is not random, but begins with close observation of characteristics and behaviors of species. A Taoist fable uses this relationship to express the nature of reality:,”Chuang-tzu dreamed he was a butterfly, and when he awoke he couldn’t tell if he was a man who had dreamed he was a butterfly, or a butterfly who was dreaming he was a man.”

“Golden School Days” is designed simply, relying on outline, shape and local colors to depict the Damascus Schoolhouse in party-mode, with birthday balloon for Audrey flying high. It is a portrait of a place within a targeted time frame, and its meaning is dependent on knowledge shared by a circumscribed audience. In a way, this weaving is a visual frontispiece for the entire project. It is also a starting place for engagement with a wider audience. After creating these weavings, a show and a book, the natural next step is to present the works via an “outsider’s” interpretation, serving as window to the internet. Visitors to the Selfies site will find meanings in these works that vary from the intent of the artists, the inside knowledge of the Damascus weavers, and the thoughts of one writer.

“Spiderman” is a statement of self and self-expression in weaving. The central image distills the selfie into an old-fashioned silhouette “shadow” profile, which is not old-fashioned at all. In his contrasting white hat, emblem of the good guy of movie culture, the subject references a century of images of Anglo/Native American interaction. These bold central design elements recede and approach against the background of Native American blanket patterns. This spatial ambiguity allows us to wonder how the artist feels about his relationship to the weaving tradition we call “Navajo”. The spider, a female in ancient Greek (Arachne) and Southwest Native American (Grandmother Spider) mythologies, represents the original weaver, spinning floss from her body as she devises patterns with an innate intelligence. Spiderman, of course, is her modern counterpart, emerging as a fictional post-WWII super-hero.

“You are What You Wear” shows the simple shapes of a garment with the bold colors and stripes of a sports uniform. I am told that the garment reflects Audrey’s customary studio garb, so I offer the sports interpretation as a nod to her “championship” of tapistry. The ends of a woven scarf flutter down from above, strong design elements suggesting a mantle about to alight. Its fringes resemble busy fingers—the weaver’s image of self, expressed through the fingertips.

“Tripper” employs a similar strategy, pairing objects from the industrial and natural, and modern and ancient worlds to create a kind of signage for the self. The winged suitcase expresses travel, alluding to the spontaneous, perhaps capricious flights of Hermes between the realms of the gods and mortals.

The most symbol-like image in this group is “Ghost Fish Fry”. The reduced fish profile is ubiquitous in human symbologies, just as blue is symbolic of water. Yet this fish, rendered in outline as if it were carved in rock or fossilized in the seabed, is not the fish symbol drawn in the sand by Early Christians and stylized on present-day car bumpers. It is the artist’s own fish symbol, ambiguously transparent, yet firm in its contours. The fish’s being is fluid: both in, and of, its environment.

Combined duo elements bespeak a concept of self that reaches for unity with other. “Bee Mine” is an image of an insect attached to a human face. Like “Ghost Fish Fry”, this piece is childlike in its rendering style. Like “Tripper”, it combines 2 objects of differing kinds. The juxtaposition of bee and face implies a certain emotional response, but the artist upends our discomfort with softly honeyed hues that show nature and humanity enjoying a mutual sweetness in their enterprise.

“Dino” is a portrait: a real horse with distinctive, individual markings. The artist has selected him, and his meaning for her, to represent her self. “Friend of the Desert”, is also a portrait of sorts, a woven portrayal of a landscape. A possible anomaly in this composition is the lollipop tree, more suggestive of the irrigated front yards of suburbia than the desert; yet its vivid, solid green shape works as a pleasing foil to the articulated contours of the landforms and sky, making us wonder, and reminding us that the desert is only alive when nature and human activity are in balance.

“On the Ready” and “Weaver, Knitter, Log Home Liver” employ place as a feature of narrative. In “On the Ready” the setting and actors are depicted with a specificity that reflects their importance to the artist. Although it could be anyone, anywhere, a very personal experience is conveyed in the rendering and placement of elements. We know from the title that the setting in time is the moment before action, and the relationship between a specific human, animal and place becomes an expression of the self. “Weaver, Knitter, Log Home Liver” is both a portrait of a specific interior and of a still life with yarn basket and socks. The image springs into actual space and motion via a strand of yarn running between a ball of yarn and half-knitted sock, reminding us that living (and art making) happens in real spaces. There is a touch of humor here, as well as a hint of rebellion where yarn departs the weft-faced surface of tapestry to make a point.    —Margaret Sunday

I have written about content and drawing style: Terry, is there anything you wish to add regarding tapestry techniques used by this group of artists?

The selfies we wove were specified to be as close as possible to 6 inches by 6 inches.  We used either 8 or 10 warp ends per inch as our sett.  The yarns varied because we did not have time to dye and did not have a wide selection of skin tones available.  Thus, quite a few people wove themselves in other colors.  (See Arlene Crooks in green and red, Sandy Kennard in a variety of pinks.) Kevynne Layne helped with simplifying designs using shadows and light. She wove her two tapestries in orange and brown.

Regarding tapestry techniques, we wove these from the front, from the bottom up, mostly with single strands of weft, though a few used simple weft bundles or two or three strands.  Tapestry technique allows the building of shapes, instead of requiring the weaver to weave from selvedge to selvedge. This lets the weaver concentrate on one area at a time, instead of moving focus from one spot to another.

Those weavers who chose to weave their own faces were met with the challenges of how to do the mouth, then the nose, then the eyes.  Each presented its own set of difficulties.  A lot of weaving, followed by unweaving occurred.  How thick are the lips?  Are teeth really white? Are lips really red? How do you weave a nose?  How many warps do you need to make an eye with white, iris and pupil? Each weaver responded to these questions in different ways, learning as she went along.  It took most of them much longer than they expected such a small weaving to make.  Some of them made multiple faces—their skill set improved with each one.

Those weavers who chose not to weave their faces, but something that would make Audrey think of them, had other challenges.  Mostly in design.  What is it that I do that symbolizes my own self?  One of my favorites is Pat Turley’s “Weaver, Knitter, Log Home Liver” because that is exactly how Audrey would see her.   —Terry Olson